Started by Deirdre - The Compulsive Gardener Wednesday, 16 May 2012 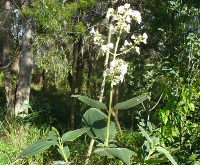 A reader, Helen, has this plant growing in her garden, as do I. It is a shrub about 3 m tall and has large Tibouchina-like leaves. In autumn it has panicles of smallish white flowers. I thought it was Tibouchina clavata but someone else suggested it is a Miconia. I wonder if anyone knows the correct name and whether or not it is a weedy species that might self-seed as some Miconia species apparently do?

Hello, my name is Meg. I"m a new member and wishing to identify this small flowering new tree found on our property on the far nth coast. It has attained about 3 metres and may be just starting to flower. The leaves are long and velvety, with panicles/clusters of small lavender-blue flowers and it is also sporting clusters of lime green berries. It intruded unnoticed but has flourished close to the road boundary during the past two years of mainly wet conditions.

Deirdre - The Compulsive Gardener Sunday, 05 August 2012
Hi Meg - I don"t know what the name of this plant is but I suspect it may be a weed. Do keep an eye on it and make sure those berries don"t start germinating all over the place. Deirdre
Kate - 2070 Monday, 24 September 2012
The plant looks like a "tobacco plant". I don"t know its formal name, it is a highly invasive plant, the leaves have an awful aroma and seedlings will appear for years. One pleasant aspect of the one that grew in neighbour"s garden was the beautiful parrots that came to eat the berries, then they would have helped spread the seeds further afield. Unfortunately, it can be seen throughout the bushy roadside areas around Sydney. Get rid of it!
Janet - 4211 Thursday, 31 January 2013
I thought tobacco weed was a declared plant. It"s a menace but no one seems to be interested in getting rid of it. It is so invasive; a shocker.
Catherine - 2071 Monday, 18 February 2013
I think that Helen"s plant with white flowers is the same plant I saw in Jeanne Villani"s Waterfall Cottage garden when it was flowering last April. Jeanne identifies it as a white form of Tibouchina holosericea
John - 4553 Saturday, 27 July 2013
John The plant appears to be what is commonly referred to as"Wild Tobacco"I believe it is declared noxious weed. It is very common on the Sunshine Coast it is spread by birds eating the berries. I have observed the following species of bird feeding on the berries:- King Parrot,Fig bird native fan tailed pigeon there are possibly others. I would be interested if members have noticed other species of birds feeding on it. Yes it has an unpleasant smell however compared to other noxious plants it is relatively easy to control and rate it 3-4 out of 10 Hope this helps John