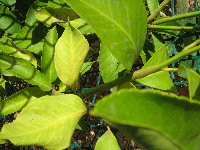 This is the worst of the images. Newer leaves appear a bit better. I"ve been giving the tree "super citrus" food or similar, some slow release little hundreds and thousands type things, seasol and aquasol. I also did a lot of what I now think was unnecessary adding to the soil before planting, blood & bone, better soil, compost & gypsum. So it"s hard to believe it could be N deficiency even though that"s what to my inexperienced eye it looks like. I wondered about the pH, found one very superficial sample close to the trunk to be 5.5. I"m guessing that"s fertiliser not properly watered in. Another just slightly [less than 1cm deep] deeper sample 30 or so cm away came in at 6.5. Should be 6.5-6.8. The soil was a little bit dry and felt compacted [too much gypsum? Had been a bit clumped and clayey; also added heaps of organic matter]. So gave a rather heavy watering to try to dissolve away any excess surface food. Drainage good. Tree about 1.3m tall w 4 lemons 6cm long. What to do?

Libby - 2093 Monday, 23 April 2012
Hi, You are probably loving your lemon to death. They are incredably hardy. I would make sure the ground around the tree is clear of grass and weeds at least an 1 meter from the truck, mulch with good quality compost and leave for the winter. Make sure it has no over hanging branches or root competition from large trees and it should come good all on its own.Good luck Libby
10dril - 3146 Monday, 23 April 2012
Thanks Libby. Not a blade of a weed for a very large area- it"s in the middle of a big garden bed, very deeply mulched, though the base of the trunk is clear to prevent a rot setting in. But there could well be root competition from this humungous privet that is a few metres away on the other side of the fence. That tree was the reason I did so much work preparing the bed- there was a lot of fibrous root stuff to hack away. I did get rid of it all back to the solid underbed of clay, but maybe it"s infiltrated back. I"ve been wishing for a long sharp saw, to dig down and slice it all off again. I don"t know how to get rid of such roots if they are again invading
Subra - 2155 Friday, 15 February 2013
I am hoping some one can advise on the problme I am having with my lemon trees... I have 2 trees in my garden, both are about 8 Ft Tall...very healthy foliage..green and grows well..however it has not flowered at all in the past 12 months...We moved into the house an year ago...and I suspect it never flowered....and I see no sign of flowering...what am I doing wrong ? I have fertlised it, I have watered it as per advise...once or twice a week, I have trimmed it iast winter...no luck ....Any advise ?
Sue - 3265 Monday, 01 July 2013
Lemon trees need iron and soil is often deficient. Drive a couple of rusty nails into the trunk or bury a handful at the roots, you will see a difference. Fertilizers often lock up iron so the plant gets none. The privet roots will be a problem too , they will love your kindness to the lemon, best idea is to drive a piece of tin or plastic into the ground at the fence line so the roots cannot get through, it would need to be down at least 60cms. Good luck. Sue b
10dril - 3146 Wednesday, 03 July 2013
thanks Sue. the privet is history and my side of the fence is finally getting half a chance at life. i"ve transplanted teh abovementioned lemon, a eureka, to another bed where i"ll espalier it. it never did thrive. it got asttacked by Citrus gsll wasp and something kept eating the new shoots. in its place is a new lisbon which is doing much better. re: iron i"ve been burying old bits of iron pipe, nails and miscellaneous rusty edging stuff for months there. even an old pair of hedge clippers sans handles; al;most unrecognisable now. teh soil is much better now in that bed. i"m optimistic. agree with you; iron was the problem.